Giles Quimby was born Nov. 12, 1871, in Colusa, Calif. to John and Susan Hill Quimby. He went into the military soon after high school and served with Teddy Roosevelt's Roughriders during the Spanish American War. However, he didn't see battle action. He was considered a marksman.
He came to the Northwest  about 1908, presumably to work as a deputy with his brother-in-law Schelle Mathews, then a deputy and later Sheriff in 1912. He lived in Montesano.
He didn't participate in any searches for Tornow, that are on record, until Mathews made it his campaign platform "to rid the hills of Tornow."  When he was elected, replacing Ed Payette, Quimby stepped up his activity in the searches. Although, he didn't join in any until after Deputy Colin McKenzie and Game Warden Alvah Elmer were found slain in March 1912.
Quimby was the man in charge of the final phase of the manhunt. Mathews had gone by train to Tacoma to testify at a trial and ran into a friend, J.P. Lucas, who said he knew exactly where Tornow was.  Mathews contacted Quimby and told him to get trappers Charles Lathrop and Louis Blair from Shelton, deputize them and go the location Lucas had pinpointed. They were also told to wait and not approach Tornow until more posse arrived. Lucas was spot-on with his location.
But Lathrop and Blair convinced him they could take the wildman. They were wrong. Quimby laid back about 75 feet while the other two approached from the north and came around to the south side of the cabin. Tornow's keen wilderness sense spotted the invaders. He waited until they were within 8 feet of him and killed them both.
Quimby fired from behind the stump, where he had taken refuge. On his seventh and final shot, Quimby saw Tornow's head droop to his chest. The firing stopped. He later said he felt Tornow figured only two men were after him. "I don't think he ever figured on a third," the deputy told his boss.

Quimby, shaking and exhausted, made a quick exit out of the campsite and hightailed it to Simpson's Camp 5 about 5 miles away. From there, he telephoned Mathews to tell him what happened. The sheriff left early the next morning and met Quimby, who directed them to the shootout site.

There was a $4,000 reward for the capture or killing of Tornow, but since Quimby was a deputy, he wasn't entitled to collect. But he did argue hard for the families of Blair and Lathrop to receive their share. The Chehalis County commissioners denied that as well. About a year after Tornow's death, Quimby was finally awarded $1,300, or one-third of the reward that the state had offered. No other remuneration was made.

After the killing, Quimby was approached by Universal Films out of Portland about possibly making a movie or even giving a talk about the manhunt. He declined, saying he didn't think it was a proper thing to hunt down a criminal in the performance of duty and then accept money for telling how it was accomplished.

"Not many men would look at the matter from the deputies viewpoint, but it is greatly to the credit of the man that he does not desire to profit by dragging a gruesome tale of the close of the career of the unfortunate Tornow around the vaudeville circuit," the editor of the Chehalis County Vidette wrote.

Not much is known about Quimby after that. His death certificate lists his only occupation as former Deputy Sheriff.

He was married to Unice Quimby, but was widowed at the time of his death.

On Dec. 4, 1947, Quimby was a resident of the Montesano Hotel at the corner of Pioneer and Main. He had been in ill health and was on crutches. He had dinner at the Beehive Restaurant across the street and was in the crosswalk heading back to the hotel in a driving rainstorm when he was struck by a vehicle driven by C.C. Haug. The bumper of the car hit Quimby's crutch and he suffered a broken ankle.

Haug picked up the injured Quimby and took him to Dr. William Hardy, who treated him. Since Quimby's health was failing, he was taken by Hardy to St. Joseph Hospital in Aberdeen. He died one month later on Jan. 3, 1948, at the age of 76.

Quimby was survived by a daughter, Maxine, of Montesano and later Portland; a son, J.M. Quimby of Portland; brothers George, of Olympia, and Herbert, of Montesano; two sisters, Stella Noel, of Bakersfield, Calif., and Amanda Mathews, of San Diego, Calif.

A funeral was held on Jan. 6, 1948, at the Whiteside Funeral Chapel. He is buried at the Wynooche Cemetery in Montesano. 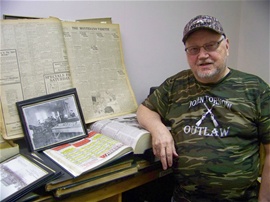 
John Tornow’s family follows the early American dream as they emigrate from Germany in the late 1800s and wend their way to the Olympic Peninsula’s Satsop Valley. Young John is fascinated with the deep virgin forest as we follow him through his youth and early adult years. He is a deadly shot and his skill with a knife is practically unmatched. John is big,

strong, fit and increasingly reclusive. He is not someone to trifle with in town. In the Satsop Valley wilderness of 1910, John is either a peculiar loner or an apex predator. Or both.

Coming from a respected family that homesteaded near the Satsop River, John Tornow was born on September 4, 1880. From the time he was just a small child, he preferred the unexplored wilderness near his home as his playground.