From far and wide, they came to remember Tornow

City Editor, The Daily WorldJune 6, 1987
MATLOCK — The hills of the Upper Satsop are silent today, much as they have been since the manhunt for suspected mass murderer John Tornow ended 74 years ago
But more than 300 people converged on a tiny family cemetery here Saturday afternoon (June 6, 1987) to recall when these same hills were alive with the sound of gunfire, and Tornow’s name was on everyone’s lips.
This crowd — some family members, many with roots in the area and even some relatives of the victims — had gathered not to glorify a killer, but to recognize a legend that looms large in their heritage.
Indeed, rarely do books on the legends of the Northwest fail to mention John Tornow, known historically as the “Wildman of the Wynooche” or the “Wildman of the Oxbow.” 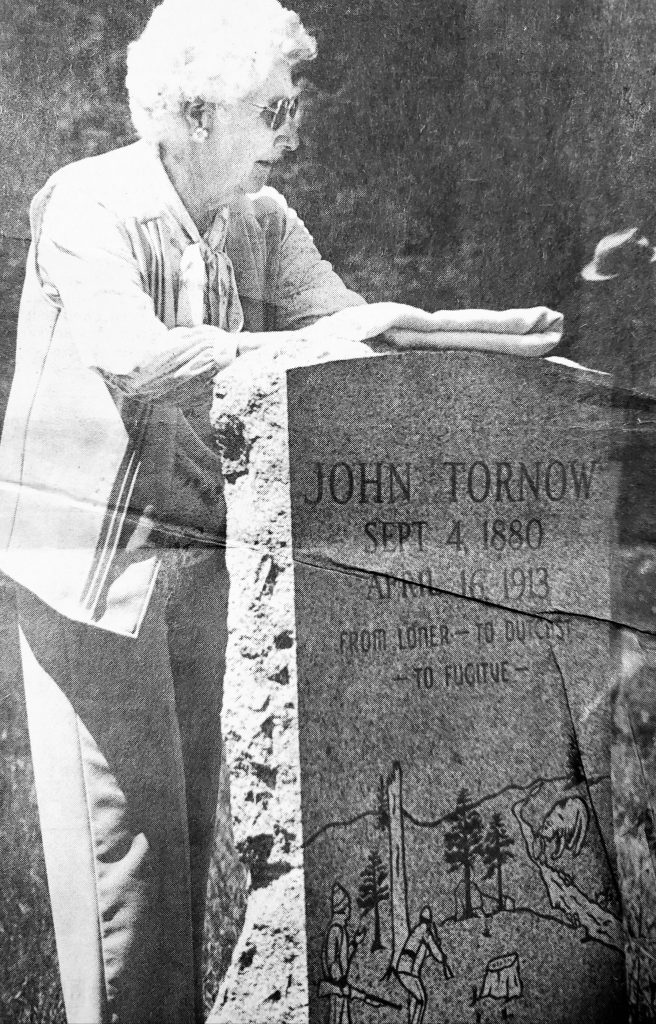 Norma Tornow Mathiesen, daughter of John’s brother Ed, unveils the Tornow tombstone on June 6, 1987.
Saturday was the dedication of a memorial for Tornow, whose gravesite had never had a tombstone. Only a rusty old can and a couple of rocks marked the spot where his body lay next to his mother and father in the Grove Cemetery.
Those attending must have believed that an old tin coffee can was hardly adequate recognition for such a legend of the Northwest, guilty or not.
Tornow was the 33-year-old, who some said was mentally deficient. He preferred life in the woods to that of his family’s farm a few miles south of the cemetery.
His life of solitude haunted him when he was branded the suspected killer of his two nephews, William and John Bauer, who were bear hunting on Sept. 3, 1911, when they were gunned down and later buried in a crude, shallow grave. This touched off a 19-month manhunt for Tornow. 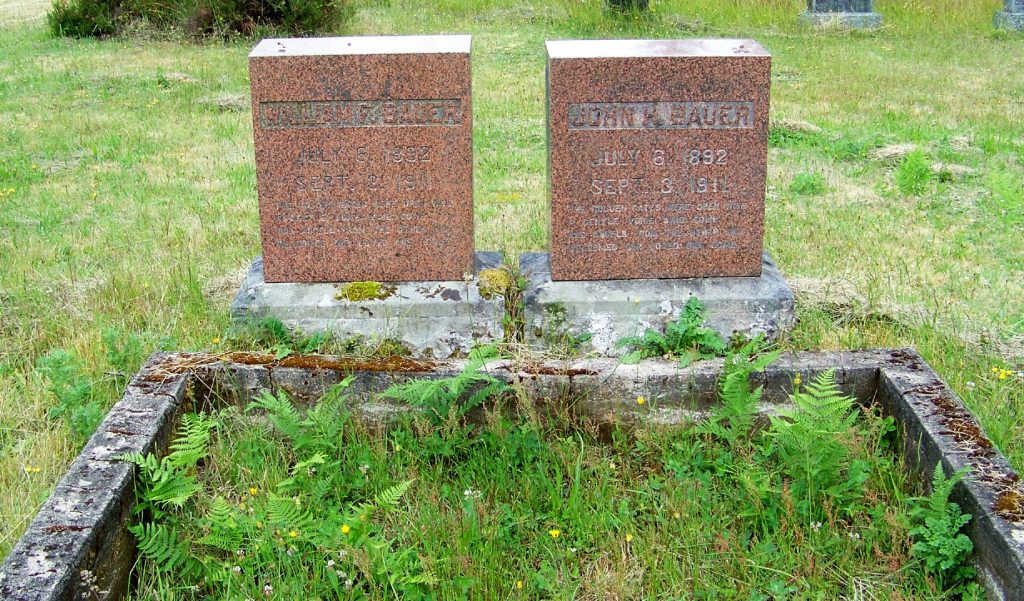 Gravesite of the Bauer boys, William and John, one row behind John Tornow at the Grove Cemetery.
Before John was gunned down by Giles Quimby in a shootout near the Oxbow area of the Wynooche River on April 16, 1913, he was suspected to have killed at least six men. They were game warden A.V. Elmer and sheriff’s deputies Colin McKenzie, Charles Lathrop and Louis Blair, in addition to the Bauer boys.Interestingly, after Tornow was slain, it was never proven in court that he was guilty of any murders. 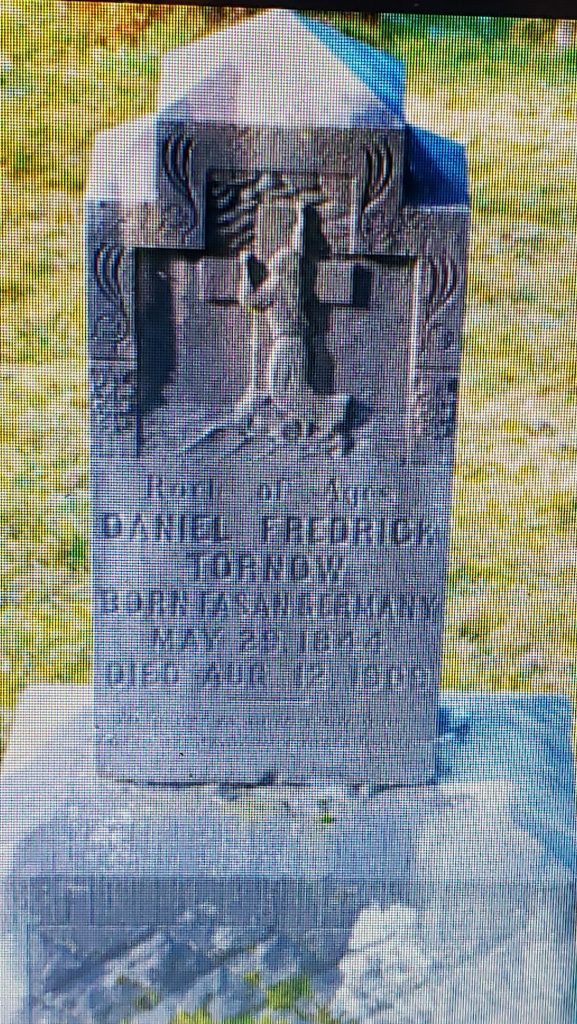 Tombstones of John’s parents, Louise and Daniel Fredrick Tornow at the Grove Cemetery.
“He is a part of the Northwest legend,” Grays Harbor County Commissioner Mike Murphy told the crowd. “This is a part of the history of our area … we are not glorifying a killer (as some suggested) but recognizing a part of a legend.”
Gordon Godfrey, a municipal court judge in Aberdeen and a researcher on the Tornow story for about 15 years, said the turnout was a “testament to everyone here. You ought to feel good about yourselves to want to be a part of this. Why are we here? Because the John Tornow story is a part of us all.”
Included among the group were four generations of Tornows, including two families from Corvallis, Oregon.
John Tornow’s niece (daughter of Ed, the youngest of five Tornow boys) Norma Tornow Mathiesen, of Napavine, unveiled the memorial. The 3-foot granite structure was constructed, designed and donated by Marty Schmid and Marsha Peterson of Harbor Granite and Marble in Aberdeen. 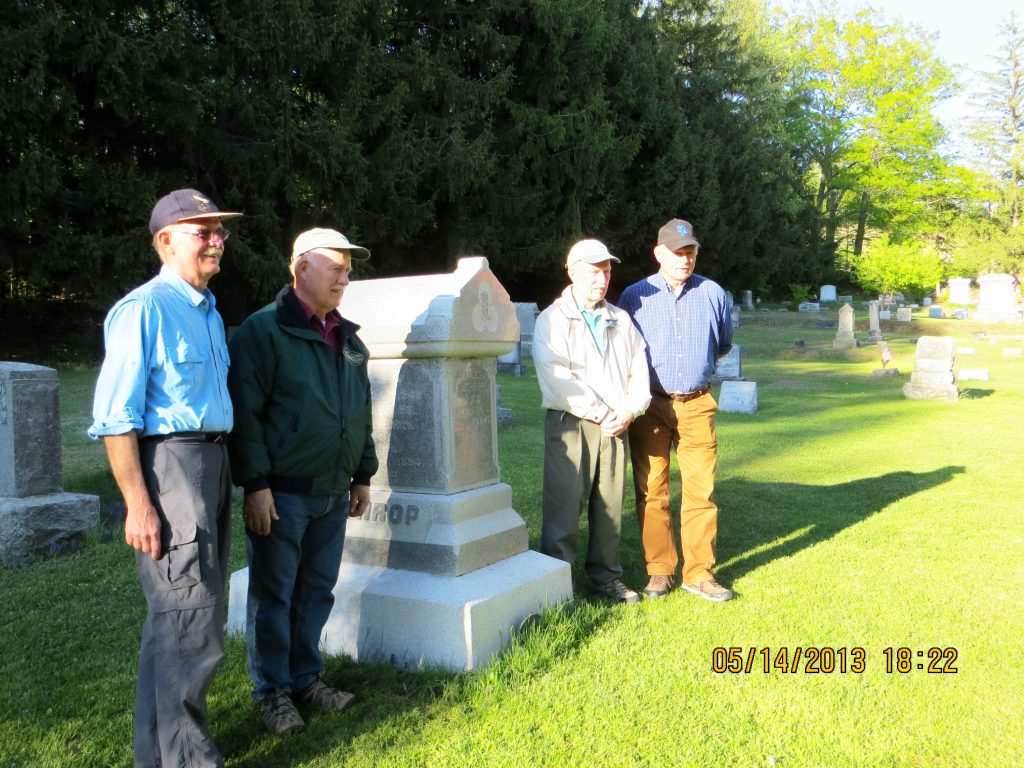 This has been the biggest day of my life,” the 74-year-old Mrs. Mathiesen said, choking back tears. “In my heart, I never believed Uncle John killed anyone. Something like that I just couldn’t believe. Maybe I was supposed to live long enough to see this.”


They came from Seattle, Port Townsend and even California to be a part of the story. 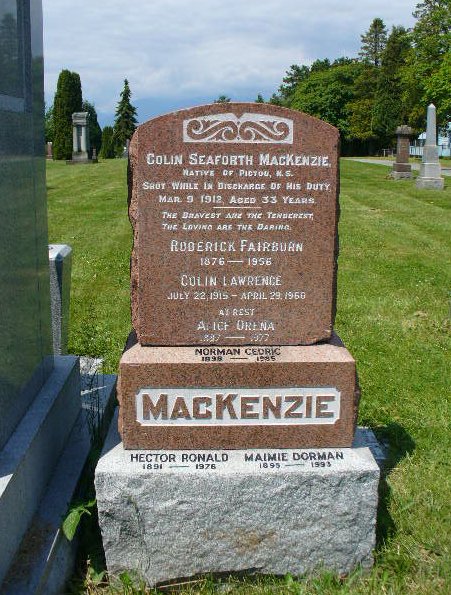 “My sister who lives in Quinault wrote and told me about this,” said Bob Kerr, a Los Angeles resident. “I grew up in this area and I wanted to be here.”
Joe Ladley arrived from Port Townsend. His father, Jim, a photographer in Elma at the time of the manhunt, made the trip in to help bring out Tornow’s body. 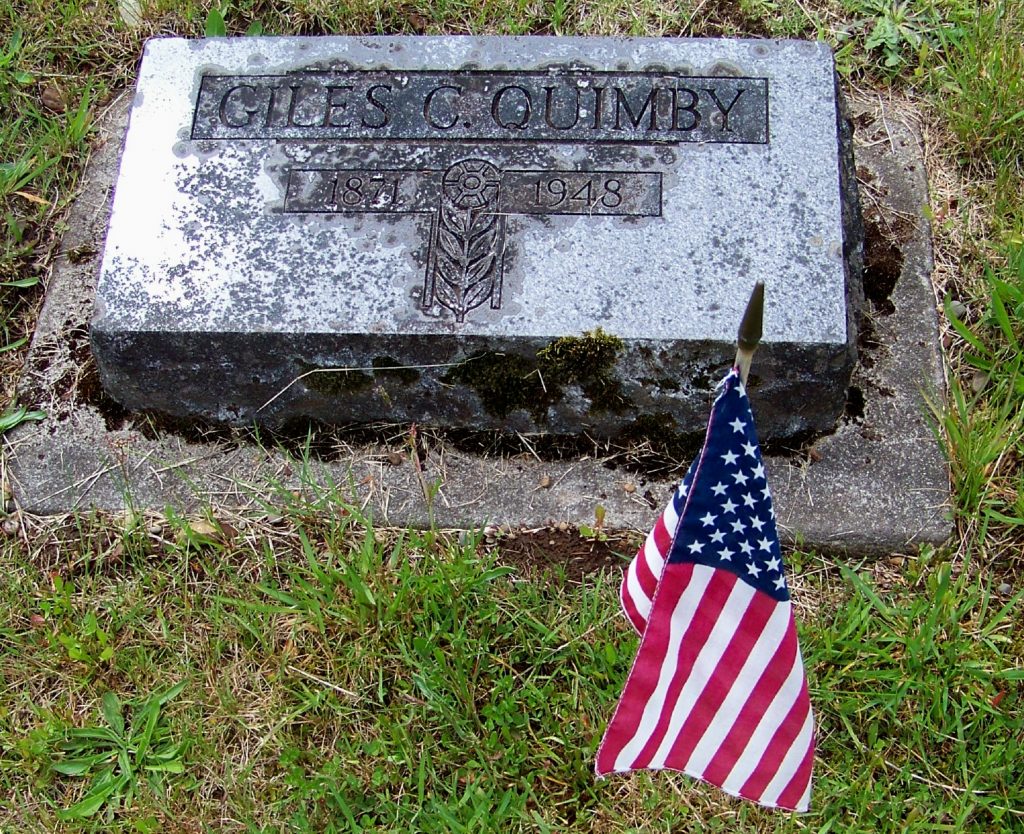 Gravesite of the Bauer boys, William and John, one row behind John Tornow at the Grove Cemetery.
The elder Ladley took many of the photos of that day that are scattered throughout Western Washington households and in many grandparents’ attics. Most of the photos were made into postcards and sold for 20 cents when more than 1,500 people came to view the body in Montesano before it was prepared for burial.
Saturday afternoon, Ladley donated the camera his father used to the Matlock Historical Museum.

Several folks who were intimately involved with the Tornows or the Bauers were also in attendance.

Dora Hearing, 86, of Matlock, told of giving water to Tornow for his horses, while Elizabeth Stevens, 92, or Montesano, related how she stood on the porch of her Upper Satsop home and heard shots the day the Bauer boys were killed. She went to school with their youngest sister, Lizzie.

“One of my brothers was in on the hunt for the Bauer boys’ bodies. I never felt then, and I don’t feel now, that John was a murderer,” said Mrs. Stevens.

The John Tornow story is one of respecting one’s individuality, living life as one chooses.

Grays Harbor PUD commissioner Tom Casey addressed that theme: “John Tornow was a loner. He wanted to be apart, and until his death he lived that life. In a sense, I think we are all loners. We want to be individuals and I think that is why we are here — to recognize that right.”
Dispelling any notion that this was a day to “glorify a killer or even an infamous event,” was the attendance of the A.V. Elmer family — not one, but four generations of Elmers, all related to the unfortunate victim.

Tom Roberson, a songwriter and Tornow researcher from the Upper Satsop, closed the ceremony with his contribution to the legend — “The Ballad of John Tornow.”

One eulogy that was read talked of the John Tornow most people don’t know. Newspapers primarily dealt with the negative aspect of the story.
But Col. Fred Goss, a state legislator from King County, in the Saturday Review of Literature of April 24, 1913, talked of the “simple-minded Tornow. By that we mean he was not educated in book knowledge … but he probably knew more about the woods than the most ardent conservationist. Tornow never shot, save in self defense. The first murders committed by him might have been in self defense, but they were not deliberate nor premediated.

“He had been a quiet peaceful citizen until strangers intruded on his privacy and interfered with his liberty. Was Tornow guilty of deliberate murder or did he strike in defense of his home and those things that he considered were his rights? Who shall tell?”

As Mrs. Mathiesen knelt to unveil the memorial, a hush fell over the cemetery.
The memorial depicts two boys hunting a bear in a forested area with an inscription that tells the John Tornow story in three descriptive words.

“From Loner to Outcast to Fugitive.”