John Tornow, played by Justin Madinafard
in the re-enactment, peers around
a tree as his captors approach.

Tours of John Tornow sites have ended for 2021. We anticipate resuming them in April, perhaps April 16, although that is Easter weekend. Stay tuned for the date of the first tour for 2022. Tours will likely be once a month with perhaps two a month in the summer.

We were elated that nearly 120 signed up for the five tours we held this year. The committee was able to present a check for $300 to the Matlock Museum to help cover expenses for painting and power washing the museum’s exterior.

We thank everyone who participated, and the museum board thanks you as well. We will either continue to help the museum or select a new project for tour proceeds in 2022.
Enjoy these photos from the various 2021 tours. 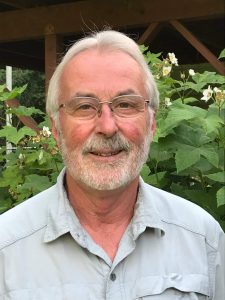 So, who was John Tornow?  Was he the early 20th Century crazed killer who killed six men including his two nephews, deep in the old-growth forests of the Olympic Peninsula?

Or was he a reclusive well-intentioned victim of circumstances, slightly off-center from a bout with German measles at age 10, but someone who would have lived a harmless life alone in the woods if he had been left alone to his devices?

We’ll never know for sure. But we can form an uneducated opinion after reading veteran journalist Bill Lindstrom’s just published, fact-based novel, Villain or Victim? The Untold Story of the Wildman of the Wynooche.

In one respect, Tornow’s is not an untold story. He’s been the stuff of legend for 100 years to the residents of the Grays Harbor area, whether they reside in the remote river valleys that flow from the Olympic mountains or the weather-beaten, soggy towns of Aberdeen, Hoquiam and Elma that surround these mountains.

But Lindstrom’s 502-page debut novel, which borders on creative nonfiction, is the most deeply researched of the books, magazine articles and hand-me-down tales about the legendary nature lover, turned fugitive, turned “Beast Man.”

Lindstrom, 72, whose 50 years in journalism included stints at The Olympian and The Daily World in Aberdeen as sports editor and city editor, grew fascinated with the John Tornow story while reporting on efforts in 1986 to finally mark Tornow’s grave with a tombstone. The granite stone replaced a broken rock and a coffee can that had marked the final resting place for years in the Grove Cemetery, nine miles south of Matlock in rural Mason County, not far from the old Tornow homestead in the Satsop River Valley.

What really ignited his book project was the fact that 300 people showed up in 1987 for the ceremony to unveil the tombstone of this enigmatic loner responsible for as many as six killings. He allegedly shot to death his twin nephews, John and William Bauer, on Sept. 3, 1911, triggering a 19-month manhunt in the backcountry of Mason and Grays Harbor (Chehalis) counties that lasted until April 16, 1913, when the raggedly, gaunt fugitive was gunned down in a shootout that also claimed the lives of two deputies. He also shot to death two other deputies in March 1912, who came upon Tornow in one of his many backcountry encampments.

The death of the Bauer twins is the most puzzling of all. Lindstrom spends considerable time in the early chapters of the book establishing the strong kinship they had with their uncle, who taught them how to hunt and fish under the approving eye of his sister, their mother, Minnie Bauer. The boys that day were armed with rifles and hunting a bear that had mauled one of the Bauer’s cows. Tornow was in the woods and armed with a rifle, too. Did they mistakenly shoot at each other with tragic consequences? Are there others, including Tornow’s alienated younger brother, Ed Tornow, who would make a better suspect?

Lindstrom does not hesitate when asked: Was Tornow at villain or a victim?

“To me, he definitely is a victim,” Lindstrom said. “He did become a fugitive, but he was never formally charged with a crime. However, I do think he shot some of the deputies during the manhunt.”

Lindstrom keeps the narrative alive through real-life figures of the day, including The Daily World reporter Dan Cloud. Many of Cloud’s newspaper accounts of the manhunt — and those of other Pacific Northwest reporters assigned to the story — are included in the book, helping to set the suspenseful stage.

One of my favorite stories had Cloud attending a monthly community meeting at the Matlock Grange in the summer of 1912. Some of 70 in attendance, including neighbors and friends of the Tornow family, which homesteaded in the upper Satsop Valley in the early 1880s, confessed to helping feed and clothe the fugitive Tornow.

“How many believe John Tornow killed the Bauer boys?” Cloud asked the gathering. Only two hands went up.

Coming from a respected family that homesteaded near the Satsop River, John Tornow was born on September 4, 1880. From the time he was just a small child, he preferred the unexplored wilderness near his home as his playground.